Lots of moves going on over at Halas hall.  Plenty of time before I can start fretting about the Preseason, but I’ll quickly dish about Chicago Bears’ recent moves, and drops, and free agent opportunities.  Chris Curran, Kenny Bernat (of Ask Dr. Kenny) and Matt Kroll (of BellyFullofHell) also have some thoughts…

Brian: Only 6 months left.  I’m going through serious withdrawal.  Hockey’s not helping… it’s like a expired box of methadone.  Combine coming up.  Bears have picked up NWU’s  Brett Basanez at QB… because that makes sense… career stats: 6 of 11, 56 yards with one interception. 0-1.

Does anyone like Jeff Garcia as much as I do?  No matter how good he makes a team, he always gets ditched for someother “project” QB.  Why 49ers, Browns, Lions and Bucs have all dropped him, I have no idea.

Curran: I thought he did well this year, i think his problem is that he is older and he is not an amazing QB.  So teams are allways going to take a chance on the possible upgrade.  he will still play well when given a chance.

the bears are just horrible with their QB choices. they get this guy from NWU and the back up QB from the Panthers?  what they hell are they going for guys with the least actual experience?  Qualifications: Nice Smile all others need not apply.

Kenny: I have basically given up on the Bears offseason. It’s more frustrating than the regular season. All this talk is about a new quarterback is bullshit. The Bears cannot, CANNOT evaluate the position at all. What they should really be doing is signing receivers left and right. But they won’t. They will just draft somebody that will probably get hurt.

At this point Jeff Garcia is probably the only decent BACKUP left. Let’s face it, he is not a championship quarterback. Other than that, he is an aging hot head that reminds me of Jeff Kent.

Bitter? The Bears have given me no choice. They hate their fans.

I don’t care how many QBs they sign so long as one of them shows up to play.

Simms looked pretty deece when he started for the Bucs a few years ago but, apparently, they got bored of him or something.  Also, didn’t Simms Sr. get pissed when a commentator called Chris “soft”.

Mike Brown, bless his heart, can’t do a season anymore. What scares me is Craig Steltz trying to make tackles in his place… did you see him get buldozed last year?

Fred Tayor would be a KILLER pick up.  A nice one-two with Forte who got really effed up after a full season with no legitimate backup.

Kenny: Simms hurt his spleen really bad. I think he ruptured it. The fact that people were giving him a hard time was probably because they were bonehead NFL fans.

I agree having Taylor as the second running back would be a much needed improvement. Just gotta form an O-LINE, which the Bears need to solve to give Orton more success this year. 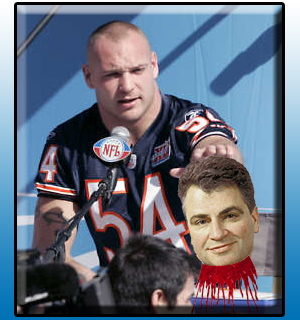 Kenny: I went off [ ] when I read that. David Haugh might be one of the wost sports writers behind Jay Marriotti. He always comes up with these theories that don’t have any merit behind them. Last year, he wanted them to trade Urlacher for Brett Favre which would have been so idiotic. When I went to Holy Cross, Haugh was a writer for the South Bend Tribune, and wrote about Notre Dame as if he made up how they were doing. The fact that he is our beat writer for the Bears is embarrassing. I invite everyone to boycott his article.

Brian: Haugh always seems to say whatever will make people talk — regardless of if it makes any sense at all.  That’s not journalism.

Kenny: I know. It’s kinda sad. I would think writing for a professional football team would be quite an opportunity and a privilege.

fuuuuuuuuuck no.  I will become a Browns fan if this happens…. Bears Looking At QB Options, Including…Michael Vick?

Kenny: Yeah, Vick as a Bear would be complete poison. The good news is, I don’t think it will happen. If you look at other papers across the nation, his name is being brought up as well as fodder for dying newspapers. What’s also interesting is, since Vick went to prison there hasn’t been any running quarterbacks. (And really I have always thought that their success is very limited.) Remember how much McNabb used to run? That changed when they groomed him into relying on his arm. Vince Young will be in that transition too. So if Michael “Pass efficiency FAIL” Vick is thinking about entering the league again, he might consider adjusting his game, because football evolves in some way every 5-10 years.

Brian: If Virginia McCaskey refuses to endorse cheerleaders, there’s no way she’ll allow them to pick up Vick.

Vick will wind up on the Cowboys or the Bengals… they all do.

Matt: Yeah this would be a huge mistake. Running quarterbacks were a fad; just like prison is a fad. Wait…

This entry was posted on Wednesday, February 18th, 2009 at 10:04 pm and is filed under American Football, football, Sports. You can follow any responses to this entry through the RSS 2.0 feed. You can leave a response, or trackback from your own site.